This is the time of year when we reflect on the year that’s just passed and plan for the year to come. It’s tempting, as I’ve written before, to attempt to rip up the old me and bring in a fresh new, improved version of ourselves. But as Jon Kabat-Zinn so wisely wrote: Wherever you go, there you are!

Often there isn’t really a need to create a new year, new me. Instead we can just work on who we already are and get more in touch with what will truly make us happy.

In that wilderness week in between Christmas and new year, when those of us lucky to be at rest might easily forget the day of the week, it can be tempting to reflect on the year that has just passed. And I found myself doing just this when people asked me for me highlights of 2017.

For This Mindful Life CIC the highlights were as follows:

For me personally as a mindfulness teacher, highlights of 2017 were: 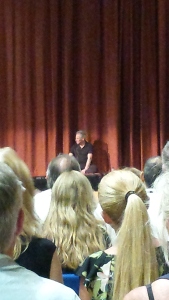 For me personally as a human being the highlights of 2017 were some golden moments with much loved family and friends. While on retreat thismindfullife.net/…7/12/21/retreating-3 I realised that while teaching, training and day job stuff are all very important to me,  it would also be useful not to take on too much in order to ensure there are further plentiful golden moments with loved ones in 2018.